William Ryan on the Auschwitz photographs that inspired The Constant Soldier

William Ryan, author of The Constant Soldier, discusses the photographs of daily life in the Auschwitz-Birkenau concentration camp, which inspired his gripping tale of guilt and love set during the final bitter weeks of the Nazi regime. 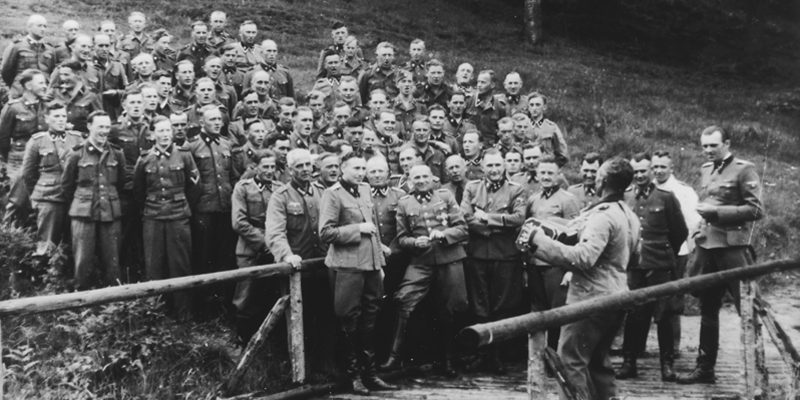 William Ryan, author of The Constant Soldier, discusses the photographs of daily life in the Auschwitz-Birkenau concentration camp, which inspired his gripping tale of guilt and love set during the final bitter weeks of the Nazi regime.


The Constant Soldier is based on an album of photographs put together by a man called Karl-Friedrich Hoecker - an SS officer and adjutant to the commandant of Auschwitz between June 1944 and January 1945, when the Russians liberated the camp.

The album was in the possession of a US Army officer from 1945, when he found it in a bombed-out Frankfurt apartment, until when it was donated to the United States Holocaust Memorial Museum in 2007. Many of the photographs were taken at a rest hut for the SS who worked at Auschwitz, located near a village called Porabka, around 20 kilometres from the camp.

When I first came across them, I was disturbed by how ordinary the men and women in the photographs appeared – it was almost as if they were on a company day out, which of course they were to an extent. And then you remember that all of the people in the photographs were active participants in The Holocaust and that many of them were executed for their roles within a very short time of the photographs having been taken.

Looking at the photographs it's natural, I think, to consider how these men and women had arrived at this point and what they must have been thinking now that the war was lost. The Hoecker album and the questions it posed were the starting point for The Constant Soldier. The novel, over time, became a story about guilt, atonement and, to an extent, love – with the photographs often forming the basis for scenes in the novel. 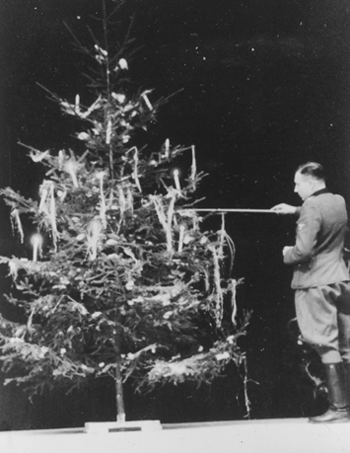 This photograph from the Hoecker album was taken during Christmas 1944, probably at the SS rest hut on which the hut in The Constant Soldier is based. In it Hoecker, the adjutant to the commandant of Auschwitz, lights the candles on a christmas tree. The Red Army liberated Auschwitz within a matter of weeks and this image directly inspired a scene in The Constant Soldier. Almost from the beginning I've wondered what Hoecker's state of mind was when the picture was taken. Was he thinking of his two young children? Or previous Christmases, in different, happier places? Or was he anticipating the events of the near future – when in all likelihood he expected to be called to account for his participation in the Holocaust.

This photograph from the Hoecker album is of the SS rest hut where most of the photographs were taken. I used this photograph, and others, as a basis for the rest hut in The Constant Soldier. I've taken some liberties with the hut's layout in the book, and made it much more luxurious than it probably was in reality. I wanted, however, to show it as a privileged bubble in amongst the rationing and privation faced by most of the surrounding population.

I've always wondered what the local people must have made of the place, on a hill close to their village. They must have known that the men and women who visited it worked in Auschwitz, after all it was built by prisoners from the camp in 1942, under the direction of Franz Hoessler (who was later executed by the allies and appears in some of the photographs). 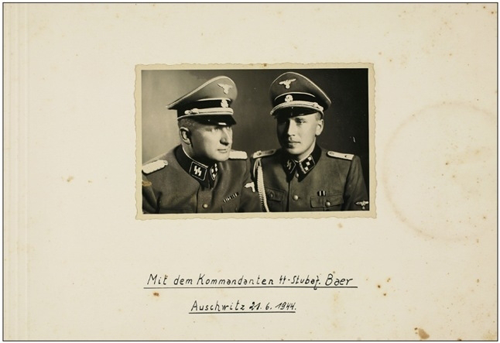 This image is of the first page of the Hoecker album in which Hoecker poses, almost romantically, with Richard Baer, the commandant of Auschwitz – whose adjutant he was. I'm interested in the circular stain beside the photograph. Did the american officer who found the photographs show the album to his friends after dinner perhaps? Did someone place a glass of bourbon down to have a closer look? Were he and his friends struck, as i am, by how ordinary these men appear to be? 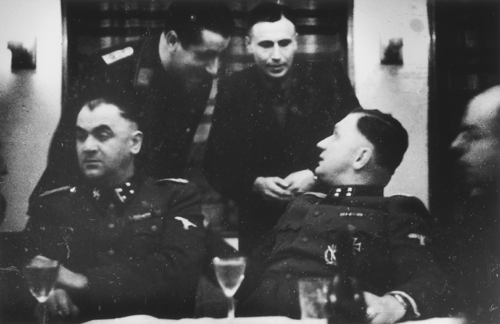 This photograph from the Hoecker album is of a dinner at the rest hut in January 1945. Sitting are Karl Moeckel, head of administration at Auschwitz and Richard Baer, its commandant. Standing behind them are Franz Xaver Krauss, brought to Auschwitz in December 1944 to facilitate its evacuation, and Karl Hoecker, Baer's adjutant.

I find Hoecker's submissive posture to Baer intriguing – he reminds me of an anxious waiter making sure the evening is going to plan. The January 1945 Soviet offensive was launched a few days later, bringing the Russians to this spot within a matter of weeks. Moeckel and Krauss were executed in Krakow in 1948 but Baer evaded capture until 1960, dying of a heart attack before he stood trial. Hoecker escaped arrest until 1962. He was sentenced to seven years in prison in 1965 but, apparently, was allowed to return to his job as a bank clerk on his release. 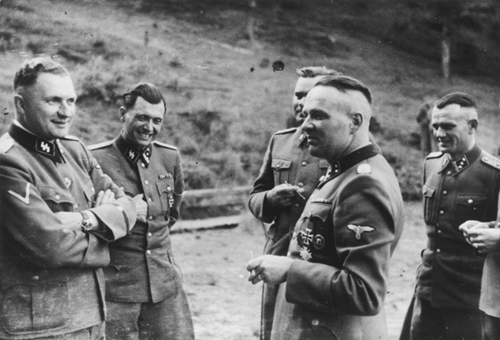 This photograph from the Hoecker album was taken at a July 1944 party for its original commandant, Rudolf Hoess, which took place at the hut. From left to right are Richard Baer, commandant of Auschwitz, Dr Josef Mengele, responsible for some of the worst of the Auschwitz medical experiments, Josef Kramer, known as the Beast of Belsen for his involvement in the horrors that the British Army uncovered when they liberated that camp, Rudolf Hoess and Anton Thumann, who was responsible for terrible crimes at Majdanek and Neuengamme.

It looks as though Hoess might be imitating someone while Mengele and the others are smiling in response. It could, without the uniforms, be an office day out. Hoess, Thumann and Kramer were executed in the immediate aftermath of the war and Baer died in custody in 1963. Mengele, of course, escaped any responsibility for his crimes. 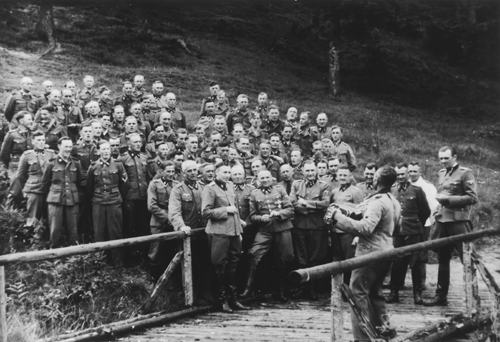 This photograph from the Hoecker album was taken at the same party. Officers and men from Auschwitz, have gathered on the slope behind the hut and are singing to the accompaniment of an accordion player. Many of the officers in the photograph, who again include Josef Mengele, were executed after the war and I wonder what must have been going through their minds.

By then, the Americans and British had landed in Normandy and had complete air superiority over Germany – while the Russians had made devastating inroads into the German resistance on the Eastern Front. Not many of the men in the photograph can have believed the war could still be won, and so must have known that there would soon be a reckoning for their crimes. 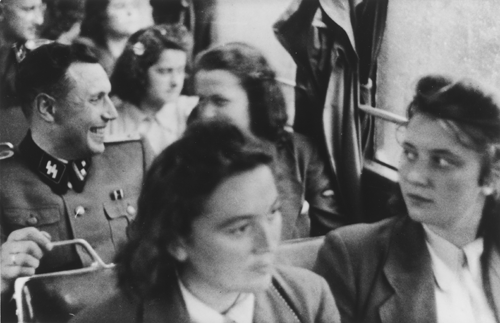 This photograph was taken at some stage over the summer of 1944 and shows a group of female SS auxiliaries on their way to the hut for an excursion. Karl Hoecker, who owned the album, is sitting in the rear seat, sharing a joke with one of the women. I'm interested by the girl sitting in the seat in front of him, beside the window. At this stage of the war some women were being conscripted into the SS auxiliaries and she seems very young. Was she a willing participant in the crimes at Auschwitz or did she end up there by chance? What happened to her after the war and, if she survived the terrible year to come, did she ever tell anyone about her connection with the camp? 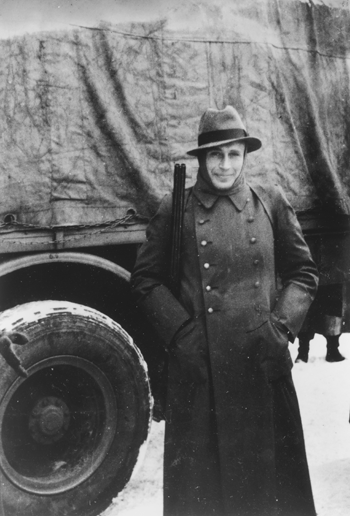 This photograph from the Hoecker album was taken in January 1945 at a driven shoot organised, probably, near the SS rest hut on the Sola river on which the hut in The Constant Soldier is based. The shoot took place only a matter of days before the massive Soviet offensive that liberated Auschwitz on January 27th.

Karl Hoecker, who owned the album, appears here looking cold and, unless i'm imagining it, more than a little aware of his likely fate when the Russians arrive. In the end, he evaded trial until the 1960s for his role at Auschwitz, being sentenced to seven years in 1965 and a further four in 1989. He died in 2000 at the age of 88, six years before the album came to light.

The Constant Soldier and this article rely on the Hoecker album which is held by The United States Holocaust Memorial Museum and the research which the USHMM has published on the photographs it contains. the views or opinions expressed in this article, and the context in which the images are used, do not necessarily reflect the views or policy of, nor imply approval or endorsement by, the USHMM.

Find out more about the United States Holocaust Memorial museum.

Love History? Sign up to our monthly email to be the first to hear about all the latest and best history books.