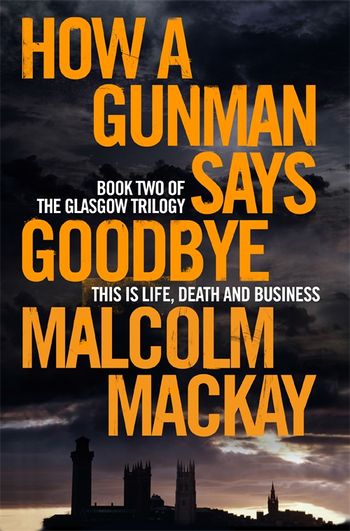 How a Gunman Says Goodbye

Winner of the Deanston Scottish Crime Book of the Year Award

How does a gunman retire? Frank MacLeod was the best at what he does. Thoughtful. Efficient. Ruthless. But is he still the best?

A new job. A target. But something is about to go horribly wrong. Someone is going to end up dead.

Most gunmen say goodbye to the world with a bang. Frank’s still here. He’s lasted longer than he should have . . .

The breathtaking, devastating sequel to lauded debut The Necessary Death of Lewis Winter, How a Gunman Says Goodbye will plunge you back into the Glasgow underworld, where criminal organizations war for prominence and those caught up in events are tested at every turn.

Malcolm Mackay's award-winning The Glasgow Trilogy concludes in The Sudden Arrival of Violence.

’How a Gunman Says Goodbye is even better than its remarkable predecessor . . . The author is already being hailed as a new star of tartan noir and if the third book in this trilogy can maintain the impetus of the first two the existing clan of Scottish writers may have to look to their laurels’ Daily Express

'You know how among all the kids acting tough at school there is one that stands out, the only one who convinces? Malcolm Mackay is that man. His characteristically urgent prose style drives his narrative at a remorseless pace as the Gunman – old and approaching the end of his career – works out what options he has left . . . Don't worry that it's set in Glasgow – there's no dialect. Nor that it's the second in a trilogy – it stands alone. By all means read the first book; you'll enjoy it. But it's time to get on board. Hail the new king of Scottish crime. This is a superb book. It should win prizes' Crime Time