The most popular books of the last one hundred years

Jeffrey Archer’s Kane and Abel sold an incredible one million copies in its first week and is still Jeffrey’s bestselling novel forty years on. But what makes a book into a bestseller? Here we share just some of the biggest bestsellers of the last hundred years – if you haven’t read them already, you’ll want to add them to your must-read list. 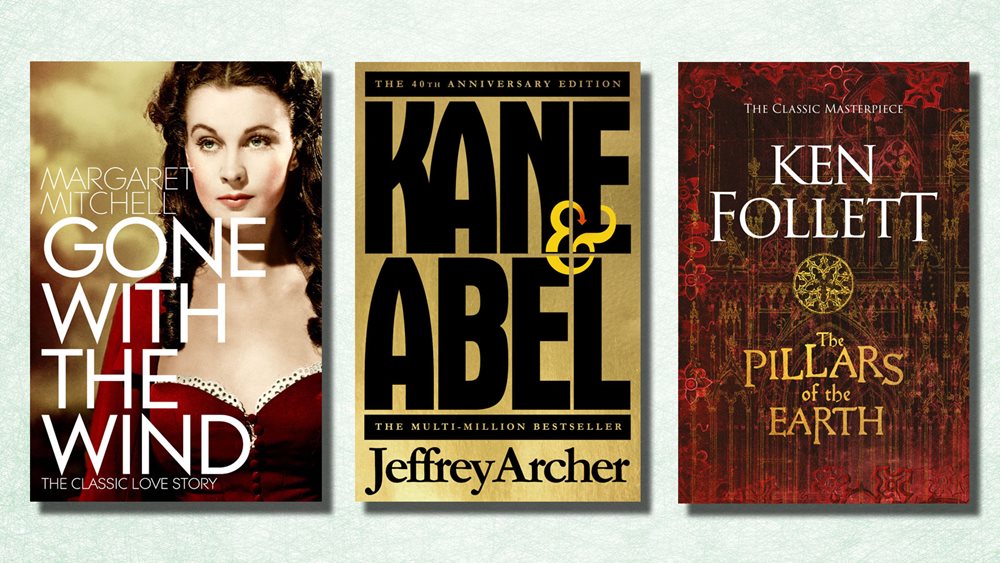 How does a book become a world favourite? Some novels have cult appeal which grows steadily over the years, while others take the world by storm the instant they are published. Jeffrey Archer’s bestselling book Kane and Abel certainly did that, becoming a global phenomenon when it was first released, selling over one million copies in its first week alone. The story of two men brought together by fate has captivated audiences around the world ever since, and 2019 marks the 40th anniversary of the book’s publication.

Bestselling novels capture the public’s imagination, sparking conversation, and allowing readers to share feelings of love, recognition or even sometimes fear. In one case, a bestseller has even inspired its own national day of celebration. Here are just a few books which have had a global impact, selling over ten million copies each. Which ones do you need to add to your reading bucket list?

Kane and Abel by Jeffrey Archer

Published in 1979, Kane and Abel is one of renowned storyteller Jeffrey Archer’s best selling novels. William Lowell Kane and Abel Rosnovski were born on the same day, on opposite sides of the world. William was born into a rich Boston family, while Abel was the son of a penniless Polish immigrant. Despite their different lives, fate is destined to bring them together as they both embark on a ruthless struggle to build a fortune. Spanning sixty years, this is the captivating story of two powerful men who will either save or destroy each other.

The Hitchhiker’s Guide to the Galaxy by Douglas Adams

The Hitchhiker’s Guide to the Galaxy is a global success story, beginning life as an incredibly popular radio series before Douglas Adams wrote the novel which went on to sell over fourteen million copies around the world. That first novel spawned four sequels and was adapted into a television series and a film starring Martin Freeman as Arthur Dent. Douglas Adams’s work is so well loved that on 25 May each year fans celebrate Towel Day, when they pay tribute to Douglas and his work by carrying a towel around in his honour – just like Arthur Dent.

Buy The Hitchhiker's Guide to the Galaxy

The Lord of the Rings by J. R. R. Tolkien

Tolkien’s fantasy epic has sold over 150 million copies and was voted Britain’s favourite novel of all time in the BBC’s The Big Read, as well as being adapted into some of the most popular blockbuster films of the twenty-first century. The Lord of the Rings has had an unrivalled influence on the fantasy genre which continues to this day.

Buy The Lord of the Rings

Pillars of the Earth by Ken Follett

The Pillars of the Earth, the first book in Ken Follett’s epic Kingsbridge series, has sold an incredible fifteen million copies since it was published in 1989, and is Ken’s bestselling novel. This spellbinding tale of ambition and anarchy in medieval England sees mason Tom Builder and Philip, prior of Kingsbridge, come together as they stop at nothing to achieve their dreams of creating the greatest Gothic cathedral the world has ever seen. The story of Kingsbridge continues in the novels World Without End and A Column of Fire, and millions of fans around the world await the latest book in the series, The Evening and the Morning, which will be published on 15 September 2020.

Buy The Pillars of the Earth

The Alchemist by Paulo Coelho

Paulo Coelho’s novel The Alchemist originally sold so few copies that his publisher dropped it – but Coelho was so sure his book would be a success he went knocking on doors to find a new publisher. Today the book has sold over sixty-five million copies and has been translated into eighty languages, setting a Guinness World Record. The novel follows the journey of an Andalusian shepherd Santiago who goes on a quest to Egypt to discover the treasure which is the subject of his recurring dreams.

Watch Paulo Coelho discuss with Oprah Winfrey how the universe conspired in the success of his novel.

And Then There Were None by Agatha Christie

And Then There Were None is the bestselling crime novel of all time by the bestselling novelist of all time, Agatha Christie. The mystery sees eight people arrive on a small, isolated island, only for each of them to be accused of murder by an anonymous voice recording over dinner. And Then There Were None has been adapted numerous times for the stage, screen and radio.

Buy And Then There Were None

Despite selling less than 20,000 copies in the first year of its publication, The Great Gatsby is now established as a literary classic, both critically acclaimed and a global bestseller. A glittering but cynical portrait of the American Dream, Fitzgerald’s novel has been adapted numerous times, most notably the 1974 film version starring Robert Redford and Mia Farrow, and for Baz Luhrmann’s 2013 movie starring Leonardo DiCaprio and Carey Mulligan.

Dan Brown’s The Da Vinci Code is one of the biggest-selling books of the twenty-first century so far, outsold only by Harry Potter. Whether you loved it or hated it, it was certainly the book everyone was talking about in 2003. Just in case it passed you by, the mystery thriller sees Professor Robert Langdon drawn into a race against time to discover the true secret of the Holy Grail and clear his name, having been accused of a murder he didn’t commit.

The producers of the film adaptation of Jaws knew the story would be a hit, buying the rights to the novel before it was even published. Stephen Spielberg’s film became the highest-grossing film in history up to that point, and is responsible for millions of people around the world thinking twice before taking a dip in the water. But the book was also a huge success, selling over 20 million copies and creating an iconic character in its man-eating great white shark.

The Lovely Bones by Alice Sebold

Alice Sebold’s moving tale of a teenage girl who watches her family’s lives from heaven after she is brutally raped and murdered became an instant classic on publication and has sold over ten million copies since 2002. This astonishing novel about life and death, memory and forgetting and finding light in the darkest of places has touched readers around the world, and was adapted into a film directed by Peter Jackson and starring Saoirse Ronan, Mark Walberg and Stanley Tucci.